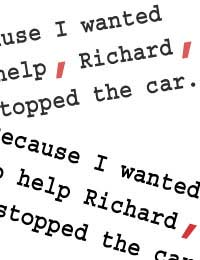 In English, commas are always used after introductory clauses and phrases, to join independent clauses, to show interruptions in a sentence, with non-restrictive clauses and phrase, and between modifiers or items in a list. Commas are also used with quotations, addresses, dates, numbers and locations.

The comma is the most frequently used punctuation in the English language, and it is also the most misused punctuation. Some writers and editors have different rules on the usage of commas; some like to use a lot of commas, whereas other texts may have next to none.

Sometimes, commas are necessary to show the exact meaning of the sentence, and without wouldn’t make sense. Look at the two following sentences:

In the first sentence, the commas show that Richard is being addressed. In the second sentence, Richard is the object of the help.

When joining independent clauses with coordinating conjunctions, the conjunctions are usually preceded with a comma, but if the clauses you are joining are short, you may want to leave the comma out. This all depends on, as the writer, if you want to indicate a pause.

After an adverbial clause is used to start a sentence, it is customary to include a comma. This is essential if the clause is quite lengthy.

There seems to be a trend for light punctuation in English text today, so with this in mind, you can leave the comma out of the introductory clause, but only as long as it doesn’t cause confusion.

By leaving out a comma, you may accidentally portray the wrong message:

The first sentence (without a comma) makes it look as though you literally cooked the children!

In English, commas have lots of different uses. Knowing when, how and where to use them will make your writing much easier to read and understand.