Home > English Punctuation > A Look at Commas and Semi Colons 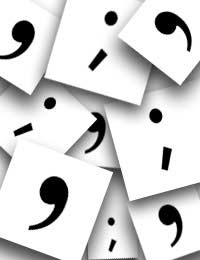 The Purpose Of The Comma

Commas are used inside of sentences, and they are basically used as a pause in the text. Commas have no actual meaning; however, they help add structure to a sentence, therefore add meaning to the sentence.

You would use a comma when creating a list or a series of events, or objects. When you come to the end of the list and the last two objects in it, a comma doesn’t normally need to separate them. Instead, you would add the word ‘and’ between them. But, if the two final items are long, a comma may be beneficial.

When you are creating a list of adjectives or even adverbs, you will need to use commas to separate them.

If only using two adjectives you could use a comma where you might otherwise put ‘and’.

In English, numbers after 999 are separated using commas. Commas separate the numbers, whereas periods (full stops) separate the decimals.

Using Commas With Names And Addresses

Generally speaking, commas are used when writing addresses, titles following a name and some dates.

When using an introductory element to your writing, you will need to add a comma before adding your next point.

Commas are usually used when combining two sentences into one. For shorter, well balanced sentences, using a comma is optional. However, it may bring a little more structure to your writing. Adjoining words such as "and, but, however and so", usually require a comma in front of them.

Semi-colons are thought of as ‘soft’ full stops. They join two related sentences together. Using semi-colons instead of full stops can allow the reader to see that the two ideas are connected in meaning.