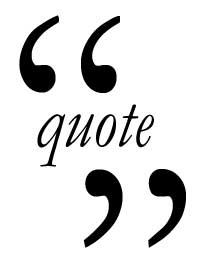 You may know quotation marks as “quotes” or as “inverted commas”. Quotation marks are used to mark the start and the end of special text that is outside of the text you are writing. There are two types of quotation marks used in the English language – (“...” and ‘...’) – We will look at both of these later on.

When To Use Quotation Marks

Quotation marks should always be used when writing the name or title of a book or a film.

Some people choose to not use quotation marks in this case, and instead prefer to use italics: Dirty Dancing and Little Women. Both examples show that the titles are in fact titles and not just normal text.

Quotation marks are used when directly quoting what someone else has said, or has written. This shows that the information is additional to what has already been written.

Words within sentences that are considered jargon or slang are usually in quotation marks. So, if a word has a particular type of meaning, but when in relation to the rest of the sentence it isn’t true, then quotation marks are used to emphasise this.

Apostrophes are different to quotation marks as they do not show special text, but rather show missing letters in certain words. Generally, the apostrophe goes wherever the missing letter would have been.

Quotation marks and apostrophes are common in the English language. If you can learn where they go and how to use them, it makes it much easier to read English text.